The Llanelli Half Marathon was hailed an overwhelming success after yesterdays event (Sunday 12th March) smashed all previous course records and set the tone for the future of the race that was taken over by Front Runner Events earlier this year.  Hundreds of spectators came out to support runners at the start line and across the entirety of the course, despite the wet weather.

The flat and fast 13.1-mile course attracted runners of all levels including first-timers, charity runners, club runners and elite athletes.  The race saw the course record smashed and hundreds of PBs achieved on a day that held perfect running conditions, with little to no wind.

The half marathon set off from Parc Y Scarlets then proceeded on the fully closed roads onto the Llanelli Wetlands Centre and along the magnificent stretch of the Millennium Coastal Path towards Festival Fields and back.  The race offered runners a rare chance to be part of a closed road race, where the route is as flat as you’ll find anywhere in the beautiful region of West Wales.  Athletes were cheered over the finish line at the stadium by a very supportive crowd that contributed tremendously to the atmosphere of the event. The men’s field was dominated by the Swansea Harriers, who filled all 3 positions on the podium.  The title was claimed by Josh Griffiths with an extremely impressive time of 01:05:18 beating the course record by a massive 4 minutes and 30 seconds.  Club mate, Matthew Rees took second place completing the race in a time of 01:11:45, followed closely by Ian Harris who took third place in 01:11:55.

The women’s course record was set by Carys Hughes of Cardiff Athletics Club securing the title in 01:21:21. Followed by Ellie Astins of Pembrokeshire Triathlon Club finishing with a time of 01:27:21 and Luticia Thomas claiming third place in 01:27:43.

Runners were able to benefit from a team of race pacers at the event helping many runners achieve their PB and hitting their target time on the day.  The fully marshalled race on closed roads, waters stops (thanks to hydration partners Brecon Carreg), energy gels, bespoke medal, finishers t-shirt and goody bag delighted the race participants. The winning team of the Corporate Challenge went to the 157 Welsh Regiment, with an average combined winning time of 01:40:20, and were amongst other teams from Castell Howell, Ceredigion Active and Dwr Cymru.

The full results and race day photos are available on the website www.llanellihalf.co.uk

“We are absolutely delighted with the turnout and reaction to our newest event and first time of delivering the Llanelli Half. From the response we have received across social media from hundreds of runners and spectators it has reinforced the decision to step in and rescue the race.

“The scenes from the runners was incredible and with the course records being smashed by Josh (Griffiths) and Carys-Mai (Hughes) just rounded off a wonderful day.  I would like to thank each and every one of the 130 or so volunteers who helped us create a very special day. Their roles are vital to the success of the race and both the runners and I really appreciate their full support that lasted from the start to the finish of the event.

“We would also like to thank Brecon Carreg (Hydration Partner) and Tesco (Trostre) for supplying the water and bananas for the runners during and after the event.   Prize money was sponsored by Ffos Las Race Course, whilst Trespass (Trostre), Frankie & Bennys and Scarlets provided spot prizes for the runners.”

The organisers added that they are already starting to look at improvements for next years race, and have confirmed the date for the Llanelli Half Marathon to take place on Sunday 25th February 2018.  Registration is already open and people can sign up to #Runelli via the website. Standard entry fee for the 2018 race is £30 (+booking fee), or £28 (+booking fee) for affiliated runners. 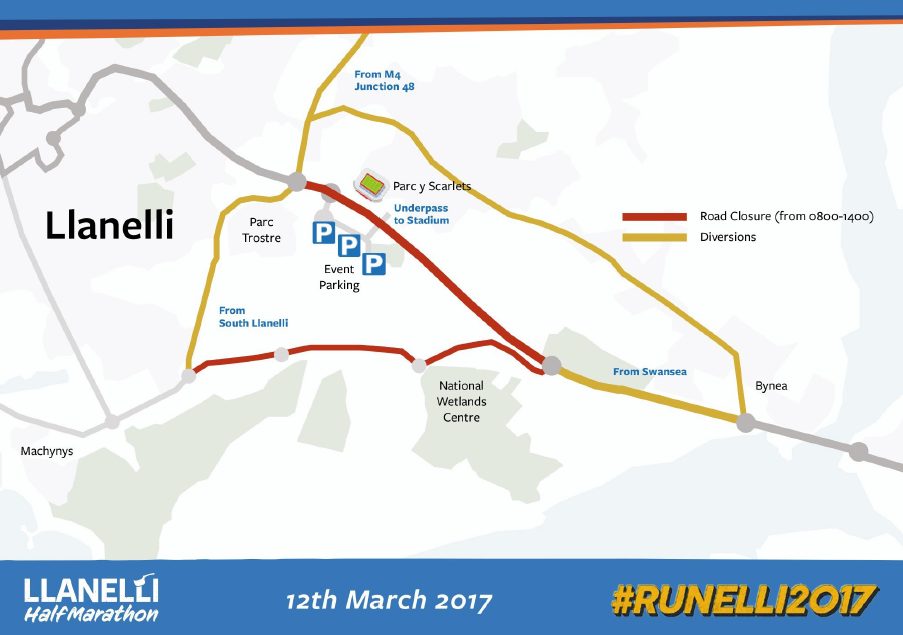